From the 5th until the 9th November the members of our Apprentices Network participated in the European Vocational Skills Week in Vienna. Through different meetings and a strong social media presence during the week, European Apprentices Network voiced the opinion of vocational students and apprentices throughout the week. In fact, during whole week members were invited to record and share their #VocationalSkillsWeek experience on their social media channels. We established a strong presence during the whole week, not only with our official Twitter channel (@EuroApprentice) but also from private accounts of our members and supporters.

A big portion of the day was reserved for internal meetings of the network. The Members of the network started the meeting with a catch-up on updates from the represented countries and the work they have been up to, before preparing for the meeting with Director General of DG Employment, Social Affairs and Inclusion, Mr Joost Korte. During the meeting with DG Korte, we introduced the EAN, after a brief summary of the 7 Key Priorities, we presented for the first time the work plan of the Network, outlining the long and short-term goals and activities.

Mr Korte than took the floor to highlight the importance of having a structure such as the EAN, to ensure that apprentices have a space to have their voice heard. He also underlined that the European Commission is committed to improving the image and the quality of apprenticeships all over Europe. Mr Koorte agreed with the EAN that one of the key issues to solve is ensuring that everyone has access to good quality opportunities and that the interests of apprentices are better represented, including through the establishment of proper representative structures at all levels.

Another exciting moment of the morning was the session in which the members of the EAN were joined by apprentices coming from different countries and networks like the Albanian Apprentices Network, the Spanish Apprentices Network and EuroApprentices, the nominees for the 2018 VET awards, and representatives of other organisations such as the  Erasmus Student Network. We took this unique opportunity to discuss with the 40 apprentices in the room around the questions of what are the challenges, the potential solutions and the obstacles to the implementation of the solutions when it comes to the proposals of our 7 priorities. 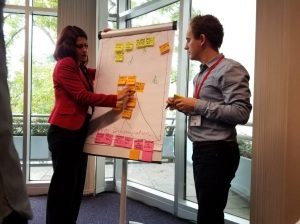 We presented our Facebook Frame that was used during the 2018 VET week Social Media campaign.

There was an afternoon session where EAN members gathered and analysed the outcomes from the morning joint session with apprentices, to create a tool for the monitoring of the state of the priority in Europe. This is a process which had already started online, as a follow up to the EAN meeting in Tirana, and will indeed continue online, with the aim to finalize the list of indicators and the Quality Charter in the upcoming months.

As Zuzana, Matthaus, and Frederic reached the end of their mandate as coordinators of the network, elections were held for a new batch of temporary coordinators. Leonardo, Sidney, and Michael volunteered and they were elected by acclamation. Congratulations!

Towards the end of the day, our members participated in many workshops organised by CEDEFOP. Particularly, our member Peter was a speaker in the “Vocational learning in the 21st century: challenges for traditional pedagogies and learning methods” workshop where he discussed the future of apprenticeships for lifelong learning, research-based education and much more!

DAY 2 – In and around Vienna

EAN members had a chance to visit several site visits in Vienna, from the apprenticeship center of the Austrian Federal Railways to the Sacher Hotel in the center of Vienna. Members also visited the CEDEFOP conference and the 2018 VET award ceremony.

Here are some pictures of the day!

On this day, our Member Frederic Piccavet also participated in the panel “Vocational Education and Training in Europe – Taking stock and looking ahead” organised by CEDEFOP with the presence of VET providers, trade unions, business partners and the European Training Foundation. During this discussion Frederic brought the voice of learners in the debate on the future scenarios for VET, highlighting the importance of quality learning and quality perspective for the professional future. 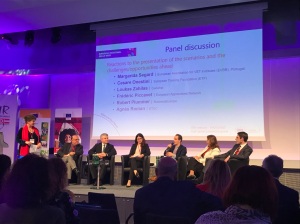 On the evening of the 8th November we also attended the VET Excellence Awards 2018 Ceremony, where we had a chance to briefly meet for a greeting Commissioner Marianne Thyssen, who praised the work of the European Apprentices Network.

EAN members took part in the closing ceremony of the 2018 VET Week. On the closing ceremony itself, EAN was trending on Social Media as it was mentioned multiple times and two of our members, Leonardo, Alex and Sidney, had a chance to speak about their experience respectively as a VET student in Croatia and Denmark, an apprentice representative in the UK  and as an apprentice in Germany.

Our members are preparing the charter and looking forward to our next meeting in the spring! 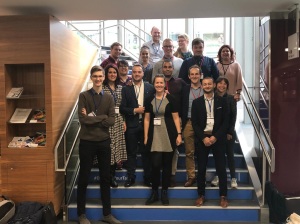 You can find more stories and photos about the week on our twitter (@EuroApprentices) and stay tuned and reach us through the contact form!